Director Lam Can-zhao’s debut feature film THE DOG follows a lonely rebel’s unpredictable, peculiar and incredible journey. Shot documentary-style while employing characteristics of hybrid cinema, THE DOG’s low-tech and casual style reveals a wealth of stories that reflect both the authenticity and occasional absurdity of the living situations of migrant workers and of those who otherwise live “below the line.” 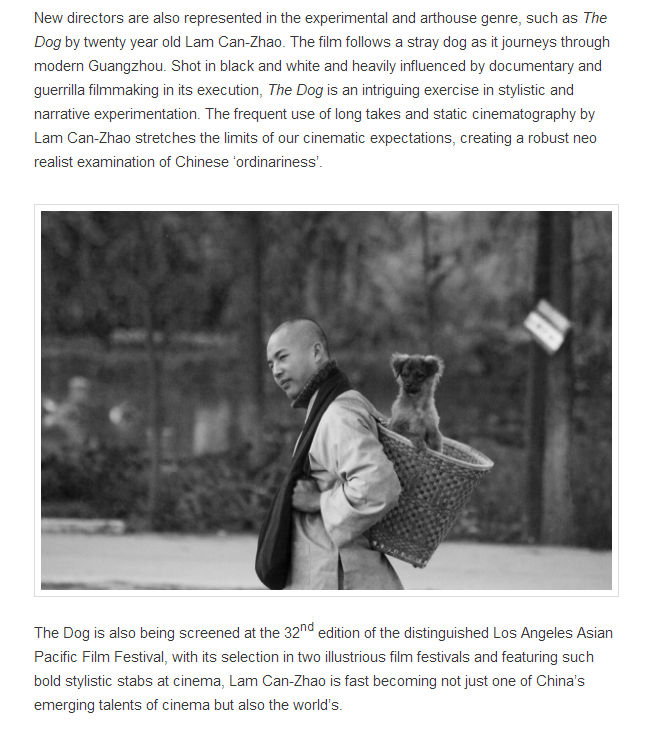 Jackie Lam: What was your inspiration for THE DOG? How did you find and train the dog in the film?

Lam Can-zhao: I never really thought about writing about a dog. This is my first film–I’d done a script before that had a dog as a character, so that’s where I got the idea.

I went to so many pet stores and pounds and even looked for a wild dog. Then I saw a classmate walking a mutt, and said, “I want this dog.”

I spent a month with Cao-cao and didn’t train him, but he was comfortable with me. Everyone in the film is not a trained professional, including the dog.

JL: What is the dog doing now?

LC: After the filming ended, I got to spend the year with the dog. But when I had to go home for New Year’s, the dog went back to its owner and the owner lost it. Now he’s like the actual dog in THE DOG—a lost dog.

JL: Wow, that’s so sad…Why did you choose to have non-professional actors?

LC: The film itself is a non-fiction and I wanted to document the real reactions of the people. Sometimes professional actors [over-act] and it seems unrealistic.

JL: How did you find these people? Also, I saw you listed in the credits as an actor—what role did you play?

LC: They are a mix of actual people, like street cleaners, and my friends, like the lonely wife in the film…I was just a person in the street who walked by for a second.

JL: What was your motivation for making THE DOG black and white?

LC: I was inspired by French New Wave cinema and the fifties…I wanted to show the passing of time, which is why the camera just sits there sometimes in the film. I like a lot of old-time movies from the 1890s and wanted to go back to a simpler style of cinema. Not every film can be black and white, but this one has to be. 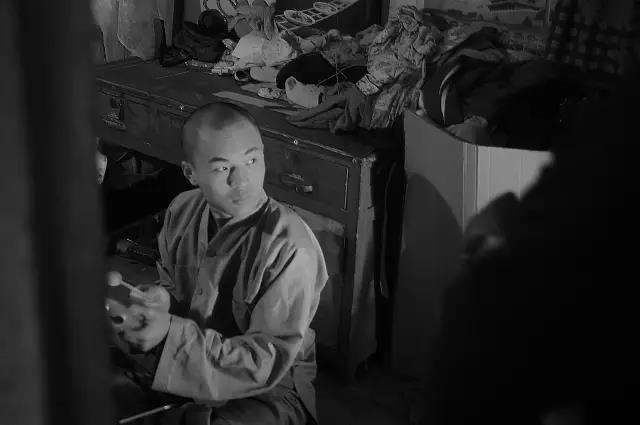 JL: Is that also why you used a unique aspect ratio [the film is square instead of widescreen or fullscreen]?

LC: The original ratio was 16:9, then I edited it because I wanted to use the camera as a literal window, with a limited scope of vision. I wanted the viewers to expand their imaginations—to grapple with the idea that even though you can’t see something, it still exists.

JL: What’s your film background like? Did you go to film school?

LC: I went to college for film for a year, but I wasn’t interested in the type of films they were teaching. Every teacher instructed us in the same thing. So I decided to use 3000 USD of my own money to make a film.

JL: The film begins and ends with the same scene, which I think is awesome. Why did you decide to do that?

LC: I tried to film THE DOG in a circular way. You can re-watch the film over and over again…It’s a never-ending film. No matter where you start, it will keep going.

If you notice, at the beginning of the film, someone calls “Action!” Some of the scenes are more lifelike, and some are more staged…

JL: So yelling “Action!” is to show that the film is artificial in a way?

LC: It is an experimental film that aims to explore the space in film. Before [someone calls ‘Action!’ five minutes into THE DOG], what we see is real life. After that, people are acting as others. I want to capture the real world and the movie world in a single long shot.  I call it a a mixture of real space and virtual film space. 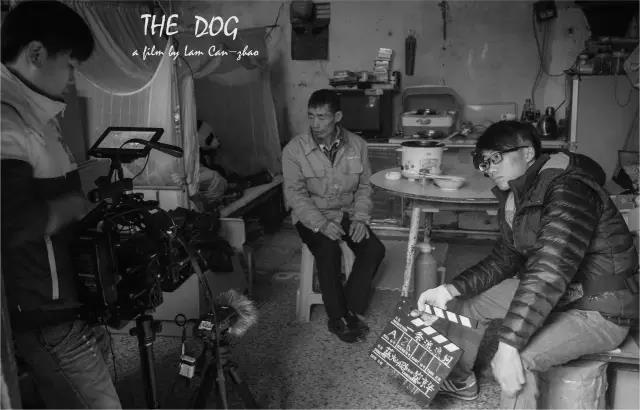 Behind the scenes of THE DOG

JL: Since you didn’t use actors, were there any unexpected moments in the filming?

LC: There is no script. I have the idea in my mind and guide the actors accordingly. I’m too lazy to write scripts. (laughs)

JL: What did you want the audience to take away from THE DOG?LC: I wanted to break the conventional molds of cinema. I wanted them to understand that a film can be different from a typical Hollywood film. This is an experimental, freestyle film.

JL: Just out of curiosity, what do your parents think about your films?

LC: My films are not for a general audience, like my parents—they’re for auteurs. So my parents don’t understand.

JL: Who are some of your favorite filmmakers?

JL: What’s your next project?

LC: I just finished a really short documentary film without a script recorded on an iPhone called THE DAY BEFORE CHINESE NEW YEAR. I have a very spontaneous approach to my projects—I’ll just grab my equipment the day of and go. I’m also going to make a film focused on a really weird/awkward romantic relationship between a documentary director and the “actress.” 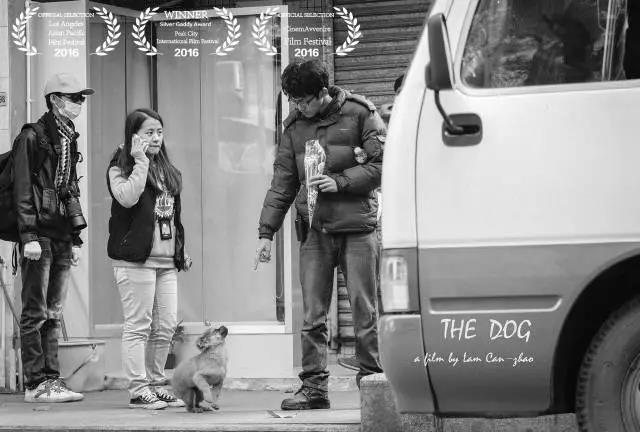 Behind the scenes of THE DOG

2015年完成处女作《狗》，该片入围第34届波哥大国际电影节、第39届美国亚裔国际电影节、第12届巴格达国际电影节等数十个国际影展，并获得欧洲国际电影节最佳实验电影，菲律宾亚洲电影节评委会奖，美国峰城国际电影节银嘉迪奖等多个国际奖项。澳大利亚国际文化评论杂志评论称Lam Can-Zhao is fast becoming not just one of China's emerging talents of cinema but also the world's.